Its been a while since Ive written though I have been working with the horses. Beauty, when pushed, came up with a hot tendon…not bowed but if I were to continue putting pressure, I think it would. She hadnt shown much speed and I found a good home for her. After all the work it was clear she would nt hold up to the rigors of racing!
Prediction continued galloping and going to track weekly. At first she bore to the outside and I had to send her with a pony on the outside of her to hold her in.
Secret was training well though we again always had to send a pony with her to go to track. She would argue and fight the rider…her nature was contrary. She did useful works and was ready to look for a race. She must have heard me say lets look for a race since she promptly put her leg through the fence and was out for months.
It seems she always finds a way to foil me! Eventually we got her going and I loaded them both up and headed to Ohio.
The trip went well and horses arrived safely. Big problem at the track was Secret. She went ballistic everytime we took Prediction out to track. She would kick the wall and carry on and damage her shoes! To correct the shoes we needed to sedate her…what a difficult filly! She would work well when against other horses and was very hesitant to run when sent alone..(not easy to always find company.) I put her in a race and she was competitive for about half the race. My plan was to continue using races to get her comfortable until she found her spot. She was getting better at the track and she was not a good candidate for shipping in and living at the farm. She was very thin skinned. She was never off her feed and ate hay like a horse.
My friend in Presquisle had an empty stall and because of the hassle everytime I tried to train Prediction, I thought she would do well there…where she didnt need back shoes and might really like that surface. I took her up and left her…she seemed to be okay for a short time and then became ill. It remains to be seem how she will fair…she has not adapted well to her new site. Im waiting to hear and will pick her up if it doesnt work out!
Posted by Janet Del Castillo at 5:03 PM 2 comments: 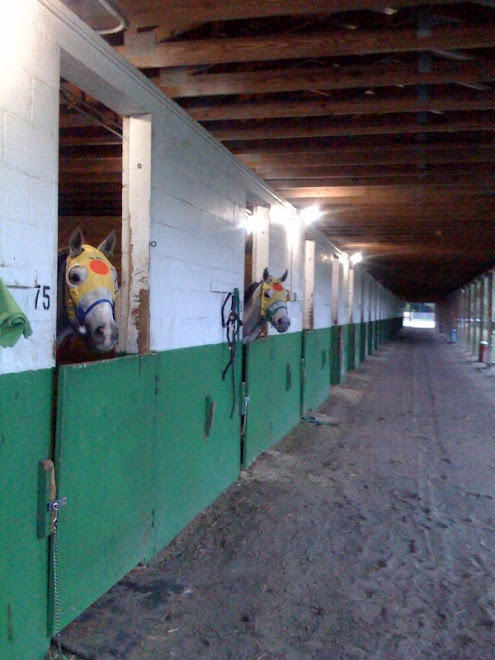